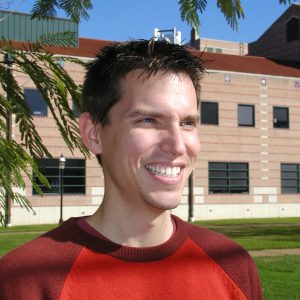 Submarine slope failures on low-angle slopes occur worldwide. The size and runout of failures are well documented, but their initiation and evolution are insufficiently understood. I review the role that fluid pressures and flow play in preconditioning low-angle slopes for failure. Simple models illustrate how fluids and earthquakes can drive slope failures. These models are used to explain massive slope failures in the Gulf of Mexico (USA), in the North Sea (Norway), and in the Pacific Ocean (Canada). I show that pore fluids prime sediments for failure; however earthquakes often trigger failure. The initial pressures also play an important role in determining if a failure will be tsunamigenic. While addressing geohazards related to failures, I will summarize future research directions for assessing submarine geohazards.

Brandon is a hydrogeologist who couples theory, experiments, and models to understand the interactions of fluids and solids in shallow, subsurface flow. Brandon has participated in ODP/IODP as a shorebased scientist (Leg 174A, Exp. 316), a shipboard scientist (Leg 194, Exp. 308, Exp. 322), as a proposal proponent, and as a panel member (STP, EPSP). Brandon earned a bachelor’s degree in geological engineering (U. Minnesota) and a Ph.D. in geosciences (Penn State), completed a Mendenhall post-doc at the USGS before starting as an assistant professor at Rice University.