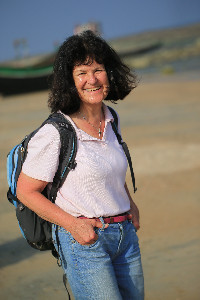 The growth and decay of ice sheets during the past 780,000 years has driven global sea-level changes. These high amplitude (~120 m) glacio-eustatic fluctuations have greatly shaped the morphology of continental margins through erosion, transport and deposition of sediments. The Ocean Drilling Program drilled in both Northern and Southern Hemisphere silicilastic passive margins for testing models based on seismic stratigraphic correlations. These models propose that margin wide unconformities are formed during sea-level low stands and that there is a predictable arrangement of facies that can be related to sea-level changes. Geochemical data and lithofacies obtained from these Ocean Drilling expeditions have allowed constraining the ages and paleoenvironments of deposition and comparing seismically defined stratigraphic sequences between margins. These results revealed that local sediment supply has a huge effect in sediment preservation making correlations across margins difficult. This study is a synthesis of the results obtained from the continental shelf and upper slope offshore New Jersey, Western Mid-Atlantic Margin and Canterbury Basin, offshore of the Southern Island, New Zealand.

Dr. Cecilia McHugh is a marine geologist who uses sediments and acoustic images to understand continental margin sedimentation in response to global changes in sea level. Most recently, she has promoted the field of submarine paleoseismology to study earthquakes and tsunamis. She has participated in five Ocean Drilling Expeditions.