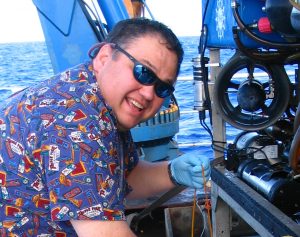 Expedition 331 represents the first time that subsurface microbial samples have been collected from beneath a hydrothermal vent system using modern microbially-motivated ocean drilling techniques. Our aim was to obtain direct evidence for a functionally active, metabolically diverse subvent microbial community from the hydrothermally active mounds located in the Okinawa Trough. We are also motivated by the recent discovery of endemic populations of subsurface Zetaproteobacteria phylotypes detected in hydrothermal vent effluent from the Mariana Trough. Initially, we have been successful with the cultivation of Fe-oxidizing bacterial enrichments using both microaerophilic and anaerobic conditions. We have also been able to detect up to 13% of subsurface ‘Zetas’ in two habitats with very different fluid flow regimes. We hypothesize that these Zetaproteobacteria are unique to these habitats and hope to more closely examine their physiology through a metagenomics approach thereby demonstrating key features that they use to survive, compete and grow in the deep “tepid” biosphere.