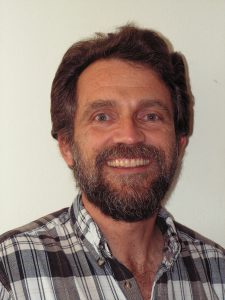 Many processes involving magma and hydrothermal fluids at mid-ocean ridges remain poorly understood, despite their profound importance in creating seafloor and modifying ocean chemistry.  ODP Leg 206 and IODP Expeditions 309 and 312 drilled Hole 1256D through flows, dikes, and two gabbro layers, for the first time finding, in a single hole, the physical stratigraphy expected from ophiolite analogies.  The gabbro layers were found at the depth expected if they formed from the bodies imaged as bright reflectors by seismic techniques at mid-ocean ridges, widely interpreted as magma chambers or melt lenses.  The composition of the gabbro layers overlaps with composition of flows and dikes, more evolved than reasonable models for the average composition of oceanic crust.  Though our understanding is far from complete, bulk-rock compositions and degree of hydrothermal alteration exclude some models for mid-ocean ridge plumbing and favor others.

The speaker led the site survey group and sailed on all drilling legs to Site 1256.