The JFAST Expedition: Getting Inside a Giant Fault 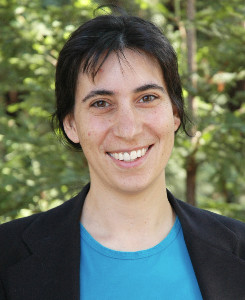 The 2011 Tohoku, Japan earthquake (Mw9.0) produced huge slip (30 to 50 meters) on the shallow portion of the fault close to the toe of the megathrust. The large displacement on this portion of the subduction zone was unexpected by seismologists and caused the devastating tsunami that took over 23,000 lives and inflicted massive damage along the northeast coast of Honshu. The JFAST project endeavored to understand the physical mechanisms of large slip during earthquakes. By drilling into the fault just over a year after the earthquake, we learned that this fault was unusually weak. Even though the fault slipped about 50 m at this spot, temperature measurements indicate that it dissipated little energy. The data show that faults may be very weak when they slip in earthquakes. Faults may have a few strong spots govern the energy available for earthquakes while most of the fault poses little resistance to motion.

Emily Brodsky is an earthquake physicist who experienced the power of ocean drilling for the first time the JFAST expedition (IODP Exp. 343) that drilled into the fault that generated the M9.0 2011 Tohoku earthquake.