University of Louisiana at Lafayette

Red or green: Overprinting of the climatic signal in sediments 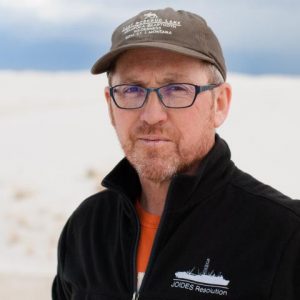 Most geologists learn during their first field trips that the color of sediments is a primary indication of syn-depositional environmental conditions of the past on our planet. While this is largely true, as a first approximation, it might be wise to consider other factors capable of affecting mineral assemblages in formations where basinal fluids percolate after deposition. During a recent International Ocean Discovery Expedition (IODP), we drilled through sediments showing alternating red and green sedimentary beds. Shipboard results from deep Miocene marine sediments in the South China Sea, at IODP Site U1502 exemplify such post-depositional fluid-rock interactions. Petrographic, rock magnetic and paleomagnetic data on cores show that the red coloration comes from an early, basin-wide, pervasive diagenetic oxidation event (with hematite). In contrast, the green beds host a pyrrhotite-magnetite mix resulting from fluid-driven reduction. The dense sulfidic stockwork in the basaltic basement underlying these Miocene sediments is the main source of the reducing fluids. Drilling deep holes that target basin basements can thus provide useful information on the transfer of fluids, thermal energy and chemical components from the basement to the overlying sedimentary layers, and the impacts of these processes on subseafloor biogeochemical conditions.

Eric Ferré, PhD, joined the University of Louisiana at Lafayette as professor and director of the School of Geosciences in August 2018. He grew up in the Southern, sunny, part of France in a small town near Toulouse and went to college at Université Paul Sabatier, also in Toulouse, where he earned his Honors BSc in 1984, MSc in 1985, PhD in 1989, and Habilitation in 2000. Dr. Ferré held academic positions at Rhodes University, Grahamstown, South Africa (1996-2001), the University of Wisconsin, Madison (2001-2002) and Southern Illinois University, Carbondale (2002-2018).

Dr. Ferré’s current research focuses on deformation of the Earth’s lithosphere, both in oceanic and continental settings, both at the geologically slow and seismically fast timescales. His main tools for addressing scientific questions are rock magnetism and paleomagnetism.