NEXT: Scientific Ocean Drilling Beyond 2023 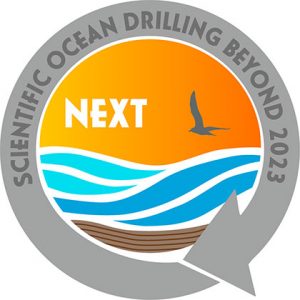 Powerpoint presentation to the JRFB, May 2019

Discoveries from scientific ocean drilling through the DSDP, ODP and IODP programs have helped reveal Earth’s history and have been critical to shaping our understanding of how our planet works. But although results from scientific ocean drilling have never been stronger, addressing future challenges in the Earth sciences will require new strategies and improved technologies that are not currently available on the JOIDES Resolution.

The United States has formed a 20-person Steering Committee to lead the U.S. planning for the post-2023 period in scientific ocean drilling.

The committee seeks broad input and support from the U.S. and international communities to consider the scientific plan and future platform needs. Similar efforts are being undertaken by other IODP members and consortia. In September 2019, during the IODP Forum Meeting in Japan, the international community will begin formulating strategies for a new or updated science plan and to articulate overall platform needs.

In order to facilitate U.S. planning, a workshop, entitled “NEXT: Scientific Ocean Drilling Beyond 2023” took place in Denver, CO on May 6-7. The NEXT workshop convened approximately 140 IODP community members to develop the U.S. plan for continued scientific ocean drilling without a hiatus at the end of the current program. Progress is being made on plans to replace the JOIDES Resolution with a modernized, more capable non-riser drilling vessel to help accommodate the transition to a long-term future in scientific ocean drilling.

The goals of this workshop were to: (1) update existing scientific challenges and identify new challenges to be included in a post-2023 science plan; and (2) identify and prioritize the required technologies and platform needs to enable the scientific ocean drilling research community to address those challenges in a new ocean drilling program. The end product will be a document that will be shared with our international partners and the National Science Foundation. This workshop report will also serve to inform other stakeholders such as the deans or directors of our research institutions and our elected representatives in the U.S. Congress.