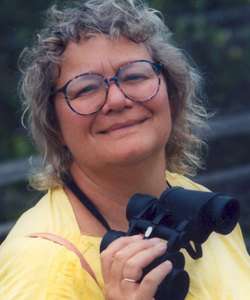 Humanity will benefit from an increased understanding of the effects of greenhouse gas emissions on global climate. Paleoceanographers use the geological record to evaluate whether sudden, large-scale emissions of such gases have occurred in the past, and what their effects may have been on a variety of time scales. The end of the Paleocene, about 55 million years ago, is thought to have been a time when great methane releases occurred in less than a few thousand years. ODP legs in the Pacific (Legs 198, 199) and Atlantic (Legs 207, 208) recovered material that is being used to assess whether such emissions indeed occurred, and, if so, what their effects were on the Earth’s physical and chemical environments as well as on life on Earth. Dr. Thomas, a micropaleontologist, studies the late Paleocene because her fossil group of interest, deep-sea benthic foraminifera (unicellular organisms that live on the ocean floor) experienced a severe extinction at that time, after surviving, without apparent distress, the end Cretaceous mass extinction caused by the impact of a large meteorite.

Dr. Thomas was a staff scientist with the Deep Sea Drilling Project (DSDP) on Legs 85 and 94, participated as a shipboard paleontologist on ODP Legs 113 and 208, and has served on the USSAC and on several JOIDES advisory panels.