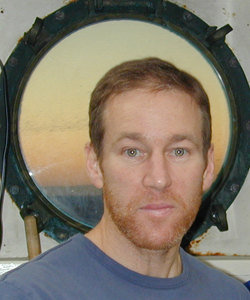 Abrupt, millennial-scale climate shifts that recur through the glacial-interglacial cycles of the last several million years are puzzling because they have no obvious cause. By developing a suite of climate proxies from the sediments that accumulate rapidly in deep-sea environments, and by measuring them in ODP cores, we have reconstructed past climate variability in great detail. We find an apparent connection between the seasonal distribution of sunlight and ice sheet growth and ocean circulation on millennial timescales. Climate proxies based on stable isotope (δ18O and δ13C), micropaleontological, and sedimentological data extending back to 0.5 Ma provide evidence for this link. Whenever the size of global ice sheets surpasses some critical threshold, indicators of iceberg discharge, deep-ocean circulation, and sea-surface temperature (SST) display dramatically larger amplitudes of millennial-scale variability than when ice sheets are small. Catastrophic iceberg discharges begin alternating repeatedly with brief quiescent intervals as the deep-ocean overturning circulation weakens and strengthens. At the same time, SST oscillations increase in magnitude from ~1°C to 4-6°C. It appears that the interaction of ice sheets and ocean circulation serves as a feedback mechanism that amplifies climate variability once there is sufficient ice. The amount of glacial growth associated with this amplification threshold represents a relatively small departure from the modern ice sheet configuration and sea level. Variable degrees of global glaciation resulted in mild, intermediate, and extreme climate states during the last 0.5 Ma. Instability characterizes nearly all of these climate states, with the exception of a limited range of baseline conditions that includes the Holocene interglacial. The Holocene is therefore not an anomalous interval, but is representative of interglacial states that are relatively brief respites from the predominant climatic instability of the Pleistocene.