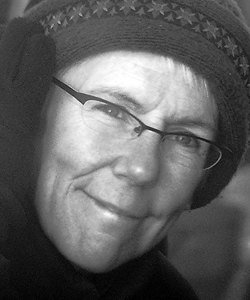 IODP Expedition 302 drilled and recovered cores for the first time from the Arctic Ocean very near the North Pole. The success of the Arctic Coring Expedition (ACEX) is a milestone in scientific ocean drilling. Previous programs—ODP and DSDP—were not able to drill in the Arctic Ocean because of the heavy, permanent sea ice cover that would crush normal ships. IODP opened up new possibilities for scientific ocean drilling by including Mission-Specific Platforms as part of the fleet. For ACEX, three icebreakers were fielded: an icebreaker-class drill ship, the Vidar Viking and two of the world’s most powerful icebreakers, Oden and Sovetskiy Soyuz, that shielded the drill ship from the oncoming flow of heavy sea ice. ACEX’s target was the Lomonosov Ridge, a sliver of continental crust that broke away from the Eurasian Plate more than 50 Ma. The ridge moved northward and subsided providing a rich environment for sedimentation that has continued to the present–capturing a continuous record of Arctic Ocean climate. The elevation of the ridge above the surrounding abyssal plains (~3 km) ensures that sediments atop the ridge are pelagic and free of turbidites. The primary scientific objective of ACEX was to recover this sedimentary ocean climate record and to sample basement rocks by drilling and coring from the “stationary” drill ship. Early results from ACEX include the capture of the Paleocene-Eocene Thermal Maximum, an abundance of indictors suggesting a strong fresh-water influence early in the evolution of the basin, and nailing down the timing and character of the onset of perennial sea ice. Continuing efforts will focus on re-construction of Arctic Ocean climate, which many argue is one of the last remaining pieces of the puzzle for understanding global climate change.

Kathryn Moran has participated in seven ODP drilling legs. She has served as Chair of numerous advisory bodies for ODP and has also managed mission-specific platform operations in the North Atlantic and Arctic. Most recently, she was Co-Chief Scientist of the IODP Arctic Coring Expedition 302.