A Rapid Rise in Greenhouse Gas Concentrations 55 Million Years Ago: A Deep Sea Perspective on the Causes and Consequences 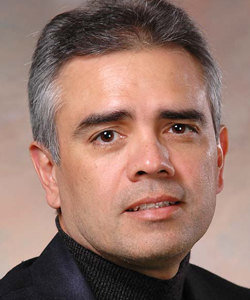 The current anthropogenic perturbation to the carbon cycle and global climate is not unprecedented. Geologic evidence exists for a similar event taking place approximately 55.5 million years ago at the Paleocene-Eocene boundary. This event is characterized by an extreme but short-lived rise in global temperature and by ocean acidification and turnover of marine biota. These changes have been attributed to the rapid decomposition of marine hydrates and release of as much as 2000 Gt of methane—a phenomenon that may have itself been triggered by gradual warming. To better characterize the evolution of this unique greenhouse event and its impacts on ocean chemistry, several coring expeditions targeting the Paleocene-Eocene boundary in the Pacific and Atlantic were undertaken during 2000-2003 by the Ocean Drilling Program. In this presentation, I will discuss how these expeditions have provided new insight into the causes and consequences of this event.

Dr. Zachos has sailed on five ODP expeditions, including legs to the Arctic and Southern Ocean, and was co-chief scientist of Leg 208 to the south Atlantic. He has served on numerous ODP advisory panels and program planning groups.