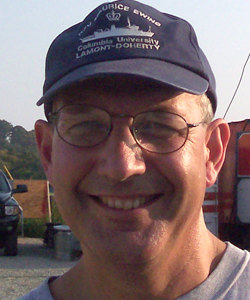 I review sea-level changes from 543 million years ago to present and present a new sea-level record for the last 100 million years based on ODP drilling on the New Jersey margin. Long-term sea level peaked at 100±50 m during the Cretaceous; this challenges previous views of much higher sea level at this time (250-300 m) and implies that ocean crust production rates were much lower than previously inferred. Sea level mirrors δ18O variations, reflecting ice-volume change on the Milankovitch and million-year scales and long-term temperature changes. Sea-level change has influenced phytoplankton evolution, ocean chemistry, and the loci of carbonate, organic carbon, and siliciclastic sediment burial. Sea-level changes over the past 100 million years reflect the evolution of the Earth from a Greenhouse with ephemeral Antarctic ice sheets to the Icehouse of the past 33 million years.

Dr. Miller has sailed on DSDP Leg 95 as a foraminiferal paleontologist, ODP Leg 150 as a co-chief scientist, and served as the co-chief scientist on the only two onshore ODP efforts, Legs 150X and 174AX. He has also served on numerous ODP and IODP panels and committees.