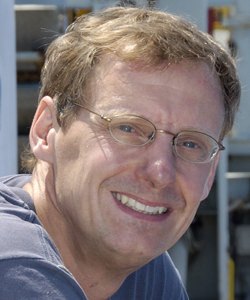 When fine grained sediments are deposited unevenly above a confined aquifer, flow is driven laterally, effective stresses above the aquifer are reduced, and slope failure can occur. This process is like stepping on a water balloon: rapid sedimentation acting as the heel drives water towards the toe where its high pressure causes large blocks of sediment to slide downhill. IODP Expedition 308, named Gulf of Mexico Hydrogeology, examined pore pressure, fluid flow, and slope stability at the mouth of the Mississippi delta—one of the great sediment dumps of the world. We found an abrupt jump in pressure immediately beneath a zone of large submarine landslides that span hundreds of square miles and conclude that sedimentation, driven by changes in climate and associated sea-level change, generates pressure, drives fluid flow, and induces landslides. In the Pleistocene, during sea level low stands, this process may have set loose significant submarine landslides around the world. Ultimately these studies may allow us to predict in what locations around the world submarine landslides are more likely—and hence what structures and local populations are at greater risk.

Dr. Flemings has sailed on Ocean Drilling Program (ODP) Legs 174A and 196 and was co-chief scientist of IODP Expedition 308. He has served on numerous ODP and IODP advisory panels, including chair of the IODP Engineering Development Panel.