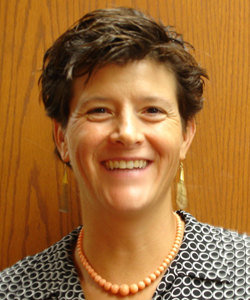 The circulation of oceanic deep waters is a key component of heat transport in the modern climate system.  But what role did deep-water circulation play in heat transport during warm climates such as the early Cenozoic?  In order to understand the nature of deep-ocean heat transport in the greenhouse climate of the early Cenozoic, we must address the role of the Pacific Ocean due to its immense size and likely influence on global climate. The first step in this process is to reconstruct deep-water mass composition and circulation patterns. This has proven difficult due to the dearth of complete Pacific sediment records with good carbonate preservation. However a growing body of Neodymium isotope data from Fe-Mn crusts and fossil fish debris is beginning to provide a reconstruction of the ancient Pacific water column.  These data suggest that a bipolar mode of deep-water circulation may have operated in the Pacific during a portion of the early Cenozoic, independent of the Atlantic.  Comparison of these data to the record of deep-sea temperatures suggests that long-term climate change preceded changes in the pattern of deep-ocean circulation.

Dr. Thomas has sailed twice on ODP cruises, Leg 198 as a sedimentologist, and Leg 208 as an inorganic geochemist.  In addition she sailed on a site survey expedition to the South Pacific in 2005 in support of a proposed drilling expedition.