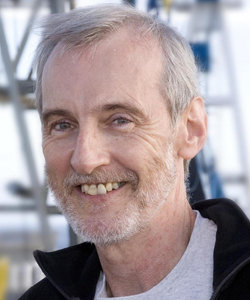 In order to predict future changes in global sea level and shoreline location, it is vital to constrain the range of past variability. One way to do this is to investigate the thick sediment accumulations beneath continental shelves and slopes. Continental margin sedimentary packages (sequences) and their bounding unconformities constitute long records of global sea-level change, created as the shoreline migrates back and forth across the continental shelf. Complicating this record are basin subsidence, changes in the rate of sediment supply and other local processes that can superimpose their signatures on the preserved stratigraphy. Scientific ocean drilling of globally coordinated transects of boreholes across continental margins provides the best way to distinguish these effects and extract the sea-level signal. Continuous coring provides information on sediment ages, depositional environment and paleowater depths during multiple sea-level cycles spanning millions of years.

Dr. Fulthorpe was a shipboard scientist on ODP Legs 101, 150, and 174A, as well as co-chief scientist of IODP Expedition 317. He has also served as a member of the ODP Science Steering and Evaluation Panels.