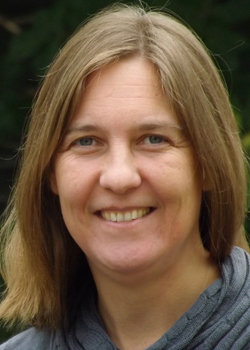 Throughout at least the past 34 million years the Antarctic ice sheet played a major role in global sea level variations. With its white reflective surface it also controlled the heat balance, wind patterns, and annual sea ice formation in the Southern Ocean. The exact mechanisms involving Antarctic ice sheet variability and heat transport in the global climate system, however, have been poorly understood due to a lack of data from the inaccessible Polar Regions. In recent years, boreholes within sediment archives on the Antarctic continental margin have begun to shed light on the conditions at the onset of Antarctic glaciation and the variable high-latitude climate of the Late Cenozoic icehouse period. By drilling continental shelf to rise transects the critical role of interactions between the ice sheet and the ocean is investigated in areas where the East Antarctic ice sheet is marine-grounded in deep subglacial basins.

Dr. Passchier’s research focuses on reconstructing the variability in the extent of the Antarctic ice sheets by analyzing the sedimentology, detrital mineralogy, and inorganic chemical composition of continental margin sediments. She participated on Ocean Drilling Program Leg 188 and Integrated Ocean Drilling Program Expedition 318, along with three other drilling projects targeting sediment archives on Antarctica’s continental margin.