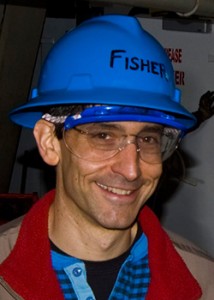 Massive flows of fluid, equivalent to the discharge of all of Earth’s rivers and streams, transfer heat and solutes between the crust and ocean. Most of this “coupled transport” occurs at relatively low temperatures and is difficult to locate, measure, or sample. As a result, much remains unknown about the rates and patterns of these flows and their impacts. Recent studies of the ocean crust, including crustal-scale hydrogeologic and tracer experiments and the next generation of three-dimensional computer simulations, reveal the complex nature of subseafloor flow systems. Dr. Fisher will present and link results from multiple experiments, and discuss how novel tools and modeling approaches are creating new opportunities in subseafloor exploration and discovery.

Dr. Fisher has participated on nine ocean drilling expeditions, most recently as a co-chief scientist on IODP Expedition 327, eastern flank of the Juan de Fuca Ridge.