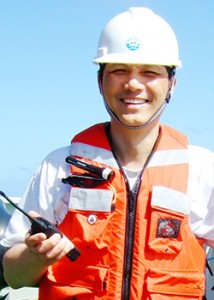 The South China Sea (SCS) is the world’s largest equatorial marginal sea, critically positioned between the world’s highest mountains, the Himalayas, and the world’s largest oceans. Covering an area of more than 3 million square kilometers – twice the size of the State of Alaska – the SCS directly controls the Earth system of the East and Southeast Asia, impacting the life of one third of the world’s population. While the vital role of the SCS is obvious, its tectonic history, however, is still a subject of considerable debate: When and how did the SCS form? When did the seafloor spreading start and terminate in the SCS? Why and how did the SCS break into two distinct eastern and southwestern sub-basins, and what are their ages? How did the past tectonic, volcanic, and climatic events interact each other? In 2014, Dr. Jian Lin and colleagues co-led IODP Expedition 349 – the first expedition of the new decade-long International Ocean Discovery Program – to address these and other critical scientific questions. Through drilling back in time, Dr. Lin and colleagues successfully determined, for the first time, seafloor spreading ages of the SCS, discovered evidence for significant past volcanic events, and obtained a rich sedimentary record of tectonic and climatic changes of the SCS. Dr. Lin will share exciting new IODP results, shining lights on the evolution of this vital marginal sea. He will also share the story of how a team of international scientists, including many from the region, have overcome challenges at sea, working towards a common goal of scientific discovery.