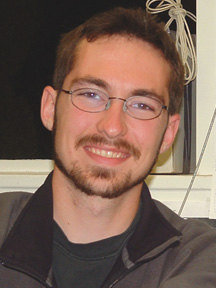 Over the last 60 kyr, the organic carbon content of California Margin sediments has varied significantly (6 to 12 wt%) on stadial to interstadial timescales, likely reflecting changes in the strength of the oxygen minimum zone. Two mechanisms have been proposed to explain these variations: 1) regional changes in sea-surface productivity influenced seafloor oxygen levels, and/or 2) the source of intermediate waters changed, with a more proximal, oxygen-rich North Pacific source during the stadials, and a more distal Southern Ocean source during the interstadials. For my Schlanger Ocean Drilling Fellowship research I will test potential causes of enhanced interstadial organic carbon accumulation by tracking changes in intermediate water-mass composition-as recorded at ODP sites 893 and 1017-across interstadials 8 to 14 (~37 to 52 kyr ago) using Nd isotopes from benthic foraminiferal calcite. My preliminary results using coeval fish debris indicate that benthic foraminifera reliably record seawater Nd values and indicate a Southern Ocean intermediate-water source during interstadials.

Unlike many marine scientists, I did not grow up fascinated by the ocean.  In fact, I had never even seen the ocean until I attended Hawai’i Pacific University where I ended up earning my bachelor’s degree in marine biology. As a senior, I took geological oceanography as an elective and soon fell in love with paleoceanography. The questions it posed seemed bigger than those considered in marine biology-and more relevant given today’s changing climate. After completing my master’s degree at the University of California, Santa Barbara, I began my Ph.D. at Texas A&M University with Deborah Thomas as my advisor. Eventually, I hope to pursue a career in academia addressing questions from all time scales using the skill sets I am developing. The challenges presented to me by my research are almost as exciting as spending time with my wife Jonna and my daughter Autumn who was born in February 2007.