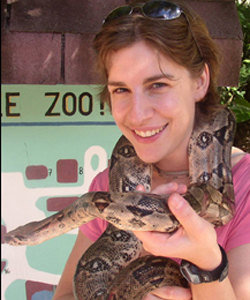 Molybdenum (Mo) isotope ratios in seawater fluctuate in response to changing global ocean redox conditions and can provide clues into the degree of global ocean anoxia.  Previous workers have used measured changes in bulk sediment Mo isotope ratios to model changes in seawater Mo isotope ratios and the associated increase in global anoxia.  Marine barite, however, may provide a direct record of seawater Mo isotope ratios because it precipitates directly from seawater, incorporating dissolved molybdate (MoO42-).  I intend to use marine barite to reconstruct the δ98/95Mo (=[(98Mo/95Mo)sample/(98Mo/95Mo)standard – 1] x 1000) of seawater through time.  This new method will be calibrated with Holocene core-tops and used to generate a record of ocean redox shifts throughout the Cenozoic and Cretaceous.  Insight into the global Mo cycle may further illuminate relationships between oceanic anoxia, biological productivity, and large scale climatic and tectonic changes.

I grew up in Green Bay, Wisconsin, a place associated with ice and snow, not oceans.  Thinking that living farther south might help me escape the frozen tundra, I moved to Chicago to pursue a degree in Environmental Engineering at Northwestern University. With an interest in climatic drivers, I realized that geology offered the grander perspective that I was most intrigued by and finished with a second major in Geological Sciences.  To further boost my geologic knowledge, I completed my Master’s at the Colorado School of Mines, studying fluvial depositional patterns at the Paleocene/Eocene boundary in western Colorado.  Currently, I am in my third year as a PhD student at Stanford University under the guidance of Dr. Adina Paytan.  My research interests lie in using heavy isotope systems to develop new proxies for ocean circulation and anoxia to better understand the linkages between these variables and catastrophic climatic events.