Dynamic Velocity Under Stress During Shear: A New Technique Using P and S-Waves to Study the Frictional Mechanics of the Upper Nankai Trough Accretionary Prism 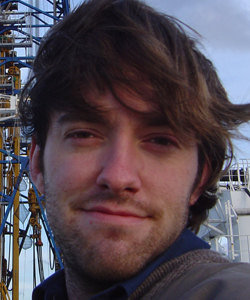 In support of the objectives of the Nankai Trough Seismogenic Zone Experiment (NanTroSEIZE) to examine the dynamics of subduction zone faults, I will apply a new technique to measure P- and S-wave velocity of core samples from the upper accretionary prism during laboratory shear to simulate fault stress, strain, and slip conditions. Changes in effective elastic moduli as indicated by acoustic velocity can be linked to changes in porosity (e.g. Gassmann, 1951) and the development and distribution of deformation fabrics (e.g. Wyllie et al., 1958). I will examine these properties as a function of normal stress, progressive strain, and strain rate under direct frictional shearing. Comparing the results of laboratory experiments to logging data from IODP Expedition 314 and velocity models of the Nankai 3D seismic volume will further understanding of how velocity characterizes the deformational behavior and mechanical states of the upper accretionary prism.

I was raised in Erie, Pennsylvania. Through my father, a coastal geomorphologist, I was exposed to the geosciences from an early age. I completed a Bachelor’s degree in Geology at the Pennsylvania State University through the College of Earth and Mineral Science and the Schreyer Honors College. As part of my senior thesis I became involved in rock mechanics research and continued on at Penn State to complete a Master’s degree with Dr. Chris Marone. More recently I have become increasing interested in the study of the physical properties and mechanisms surrounding the generation of large plate-boundary earthquakes and tsunamis. I was fortunate enough to be offered a chance to work on board the drilling vessel Chikyu during IODP Expedition 316 to the Nankai Trough. I am currently starting my fourth year in a doctoral program in Geophysics with Dr. Harold Tobin at the University of Wisconsin-Madison.