Early Paleogene Eolian Dust in the Pacific Ocean: Is There a Connection Between Dust Flux and Orbitally Paced Lithologic Cycles? 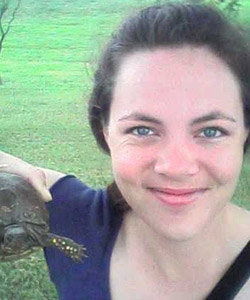 Links between orbital cycles, the waxing and waning of ice sheets and changes in dust flux have been established for the late Cenozoic, but remain poorly understood during the early Cenozoic “greenhouse” climate. Using 232Th as a proxy for eolian dust, I propose to determine whether or not a relationship exists between insolation variations (orbital cycles) and changes in eolian flux to the Pacific Ocean during the Paleocene, ~58Ma. This along with other geochemical data will be used to evaluate how accurately traditional chemical extraction techniques isolate the eolian component in deep-sea sediments.

I grew up in Sodus, New York, along the southern edge of Lake Ontario. In 2001, I earned a Bachelor of Arts degree in English and Writing from the State University of New York (SUNY) Oswego College. I’ve collected minerals and fossils as a hobby for years, and my love of geology and the ocean prompted me to complete additional coursework in math and sciences at SUNY Brockport College. Currently, I am working on my doctoral degree in geological oceanography at Texas A&M University. I have completed two oceanographic cruises as a student, one in the Gulf of Mexico and one in the Galapagos, Ecuador, and will participate in the upcoming IODP Expedition 324 to Shatsky Rise. My primary research focuses on the use of geochemical proxies to determine ancient seawater chemistry, which is essential to paleo -environmental/-climatic reconstructions.