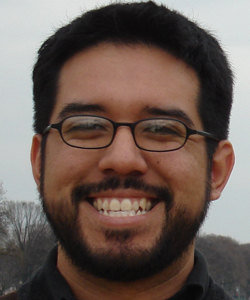 Fixed nitrogen in the ocean is a major limiting factor for marine biological sequestration of rising atmospheric pCO2. Existing paleoceanographic records of marine sedimentary nitrogen isotopes (δ15N) from the last 3.5 Ma exhibit a positive shift from relatively low values in the middle Pliocene to relatively high values in the glacial-interglacial world. This change has been posited as a widespread increase in denitrification, but the details remain inconclusive due to the lack of records from regions of nitrogen fixation. I propose to produce the first records from zones of nitrogen fixation in order to reconcile the existing records of nitrogen change.

Born and raised at the steps of University of California, Riverside, I moved to Northern California for college to live among the Sequoia sempervirens while attending Humboldt State University where I earned a B.S. in Chemistry.  In my sophomore year, I began fraternizing with oceanographers at Old Dominion University, in subsequent years with folks at Hampton University and then Woods Hole Oceanographic Institution (WHOI).  I was hooked on the integrative nature of this young field of research, and jumped at the opportunity for employment at WHOI after graduating.  As a third year Ph.D. student at University of California, Santa Cruz, among the Sequoia sempervirens once again, I am now working with Dr. Christina Ravelo and Dr. Matthew McCarthy, using new tools to evaluate changes in the marine nitrogen inventory and related impacts on marine productivity over various timescales.  When I’m not in the lab, I enjoy spending time with my wife, brewing beer, playing tennis, snowboarding and surfing.