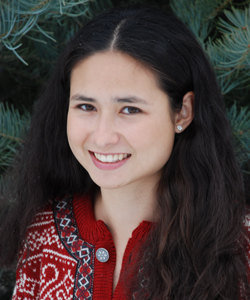 Long, continuous cores from Integrated Ocean Drilling Program Expedition 323 in the Bering Sea provide an unprecedented chance to look at Arctic/sub-Arctic climate change. Site U1342, located near the present-day oxygen minimum zone, contains unique alternating laminated and massive intervals that represent a highly sensitive record of a rapidly changing environment. This proposed project would assess whether reduced oxygen levels associated with laminated intervals were caused by changes in productivity (indicative of local/regional climate change) or ventilation (indicative of global climate change). This project will, for the first time, test the working hypothesis that rapid North Pacific climate change is caused by fluctuations in ventilation.

While majoring in Geology as an undergraduate at Carleton College, I became fascinated with the idea of using the rock record to reconstruct changes in Earth’s climate. Since then, I have worked on several diverse paleoclimate records. I earned an M.S. in Geology at the University of Michigan, where I wrote two papers with Dr. Ingrid Hendy: one linking the growth and decay of the Cordilleran Ice Sheet to offshore turbidite frequency, and the second reconstructing changes in the Southern Hemisphere westerly winds using proxies of freshwater runoff into the New Zealand fjords. Now at the University of California, Santa Cruz, I am working with Dr. Christina Ravelo on multiple geochemical proxies to reconstruct changes in climate and circulation in the Bering Sea. When not busy in the Stable Isotope Laboratory, I enjoy running, rock climbing, Ultimate Frisbee, beach volleyball, and losing myself in the beauty of coastal California.