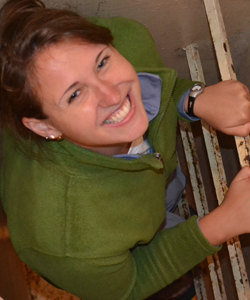 Mass wasting of sedimentary rock from uplifted accretionary wedges injects recycled organic carbon, along with modern material into the marine environment. In an active margin system this recycled pool represents a significant portion of the organic carbon that becomes buried (Blair et al., 2004). The behavior of recycled carbon as it moves towards subduction zones remains poorly understood beyond the shelf and upper slope of active margins. Recycled carbon (e.g., kerogen) is more inert than younger forms derived from plants and soils, and I propose this inherent recalcitrance should lead to persistence, even through burial and incorporation into the accretionary wedge. To assess the validity of this hypothesis, sediments from the Cascadia subduction margin will be analyzed for the presence and persistence of recycled carbon. Vibrational spectroscopic methods will be used to track recycled carbon in the deepwater marine environment, and downcore over million year timescales. Biomarker and stable isotope analyses will be used to track multicycle forms of carbon for comparative purposes. The results of such investigations will allow for the reconstruction of the dynamic history of the Cascadian margin geochemical environment and provide experimental input to future models of the global carbon cycle.

Born in the Appalachian Mountains and then living in the coastal southeastern United States, I developed a deep appreciation for the connections between mountain and coastal systems. I attended North Carolina State University, where I pursued a B.S. in Marine Sciences. During my undergraduate career I became interested biogeochemistry – specifically in the fate of organic carbon in active margin coastal regions, where tectonic plates converge. With this focus I continued at North Carolina State University to receive a M.S. in Geology. I also have a strong interest in mapping and the visualization of spatial attributes of Earth systems and earned a minor in Geographic Information Systems. Since then I have continued my research into active margin processes by pursuing a Ph.D. at Northwestern University with Dr. Neal Blair and Dr. Steve Jacobsen. I am currently working on a variety of field sites, including New Zealand, Cascadia, and Alaska.