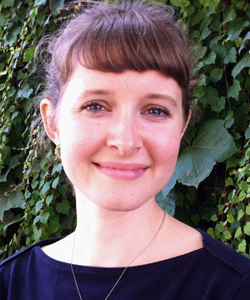 The early Pliocene (5.3–3.6 Myr) was characterized by mild greenhouse conditions (3-4°C warmer than today), moderately high atmospheric CO2 concentrations (~400 p.p.m.), and expansive changes in tropical sea surface temperatures. These conditions drove fundamental changes in tropical hydrological patterns, but the terrestrial ecosystem response, which is sensitive to changes in atmospheric CO2 concentrations, aridity, and seasonality of precipitation, is less well known. Furthermore, investigating vegetation response to these climatic changes in tropical northeast Africa will inform how variable regional habitats were during early hominin evolution, as terrestrial records from this period are spatially and temporally limited. Marine sediment core DSDP Site 231 from the Gulf of Aden is the closest marine site in proximity to the hominin fossil-rich region of the east African Rift Valley. The continuous deposition of wind blown terrestrial material to this site provides a unique, high-resolution perspective on environmental change recorded in the isotopic composition of plant leaf waxes. This project focuses on the early Pliocene to constrain hominin environments during a modest greenhouse world.

The social, scientific, and political complications associated with climate change have been core concerns throughout my education. While participating in Sea Semester at Woods Hole Oceanographic Institution, I realized that science was the avenue through which I wanted to approach this societal issue. For my senior thesis at Bard College, I researched the paleoecology of Lake Bonneville, Utah during the Last Glacial Maximum and discovered that paleoclimatology offers an invaluable perspective from the past to better understand today’s climate system. Intrigued by the potential to more specifically and quantitatively assess past environmental conditions through the use of biomarkers, I began my Ph.D. at the University of Southern California in Los Angeles. I work with Dr. Sarah Feakins to extract organic molecules, specifically plant leaf waxes, from marine sediment cores to explore changing environmental conditions during warm periods in earth’s history and potential evolutionary pressures caused by climate change during early human evolution.