A Record of Ice-Rafting in the Bering Sea 1.3-1.6 Ma: Exploring the Influence of Obliquity and Precession on Ice-Sheet Behavior 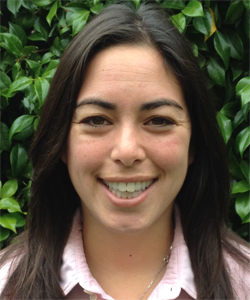 Advances in stable isotope proxies and dating have brought insight to the looming questions of what drives the Pleistocene glacial cycles, but the exact relationship between orbital forcing and the variability of ice sheet volume still remains unclear. To investigate this relationship this research focuses on the the linear 40kyr glacial cycles that represent a more straightforward test of orbital theories. The 40kyr perodicity can be explained by two contrasting theories, one that includes both precession and obliquity forcing while the other exludes precession. An ice-rafting record (a proxy for ice sheet dynamics) will be generated from cores recovered during IODP Expedition 323 to the Bering Sea to test the two competeing orbital theories.

I grew up in the San Francisco Bay area swimming in the Pacific Ocean and sailing on San Francisco Bay. I received bachelor degrees in biology and community studies at the University of California, Santa Cruz, pursuing my interest in public health. While working in health care after college I found myself most passionate about my weekend job as a naturalist in the Gulf of the Farallones National Marine Sanctuary. During this time it became clear the most pertinent challenge we face is the impact of climate change on the oceans. My first research position was in Dr. Edward Carpenter’s marine microbial ecology lab at San Francisco State University studying the effect of elevated pCO2 on Emiliana huxleyi. Pursing my curiosity about the changing oceans, I joined Dr. Ivano Aiello’s lab group at Moss Landing Marine Laboratories, where I was introduced to sedimentology and paleoceanography. It was there I earned a masters degree in marine science researching lithologic variability on millennial time scales in the Bering Sea. I am currently pursing a Ph.D. at the University of California, Santa Cruz with Dr. Christina Ravelo.