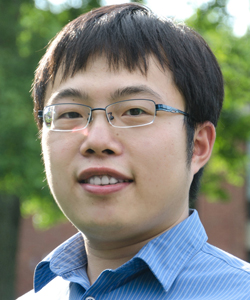 Despite its vast geographic area, the South Pacific gyre has been minimally explored in terms of its changing conditions over glacial cycles, largely due to slow sedimentation and poor preservation of carbonate in its deep sea sediments. I have developed a sensitive method for measuring the nitrogen isotopes (δ15N) of organic matter protected within the skeletal aragonite of stony corals (coral skeletal δ15N). My analyses of modern corals suggest that the coral skeletal δ15N first and foremost records the δ15N of regional ocean nitrate, with a secondary effect of local reef productivity. I now propose to apply this new proxy to Tahiti fossil corals from IODP 310, investigating the marine nitrogen cycle of South Pacific since the last deglaciation.

I grew up in Xuzhou, China, a city with more than 4,000 years of history. Studying history was an important part of my early education. In high school, I became interested in chemistry and geography. As a result of these layered interests, in college I became fascinated by the fact that geochemists can reconstruct climate history timelines using merely ice cores, tree rings, fossil corals, and sediments. Learning about these natural archives caused me to become devoted to the field of paleoclimate and paleoceanography. My undergraduate research topics at Nanjing University included the Holocene Indian monsoon variability and human impact on the riverine organic carbon cycle. Currently as a Princeton University graduate student, my work involves reconstructing past marine biogeochemical changes using fossil corals and the nitrogen cycle on modern Bermuda reefs with Dr. Daniel Sigman.