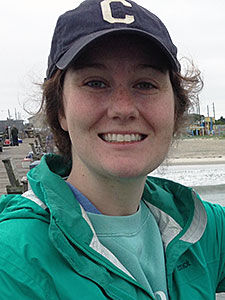 A significant reorganization of the global thermohaline ocean circulation occurred approximately 900 thousand years ago (ka) during the Mid-Pleistocene Transition (MPT). At this time, glacial atmospheric CO2 decreased and ice age cycles transitioned from 41-kyr periodicity to the 100-kyr pacing characteristic for the late Pleistocene. The deep Pacific is the global ocean’s largest carbon reservoir and as such likely played a role in CO2 storage on glacial- interglacial timescales. I propose to use the B/Ca proxy for carbonate saturation in the benthic foraminifer Cibicidoides wuellerstorfi to investigate the evolution of the deep Pacific carbon reservoir across the MPT. I will test the hypothesis that the deep Pacific played a significant role in CO2 drawdown and storage across this interval.

When I started my undergraduate career at Pomona College, I was excited to study anthropogenic climate change and focused on a degree in Environmental Policy. After taking an introductory geology class on Earth History with Dr. Robert Gaines, however, I realized the power of putting modern climate change in a geologic context. Fascinated by interpreting records of earth’s climatic history, I set out on a career in paleoclimatology. This brought me to my current work with Dr. Bärbel Hönisch at Columbia University. In our lab, we use boron-based proxies in foraminifera to reconstruct the geologic history of ocean acidification and the oceanic carbon cycle. I began my PhD with series of culture calibration experiments in living planktic foraminifera aimed at interpreting the ocean acidification that occurred during the Paleocene-Eocene Thermal Maximum. My work has more recently shifted to reconstructing changes to deep Atlantic Ocean carbon storage across the Mid-Pleistocene Transition. The Schlanger Fellowship will allow me to investigate whether the Deep Pacific Ocean also played a major role in carbon storage across the MPT, possibly in response to the large circulation changes observed in the Atlantic.