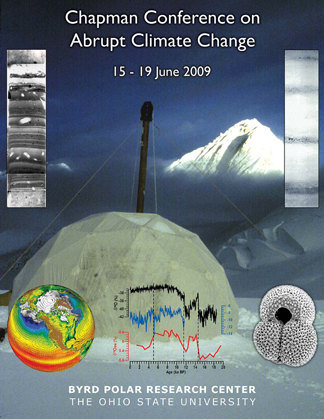 Nearly 100 scientists working in disciplines ranging from atmospheric and marine chemistry, paleoclimatology, paleoceanography, paleoclimate model-data comparison to archaeology attended the week-long Chapman Conference on Abrupt Climate Change. The basic purpose of the conference was to understand the spatiotemporal extent of abrupt climate change and the forcings behind it. Most of the presenters demonstrated that, regardless of whether the paleo-records were from lakes, speleothems (cave formations), ice-cores, or marine sediments, abrupt climate change was a recurrent phenomenon at least during the last glacial-interglacial climate cycle (14.6-116 ka). Whether such recurrent events occurred during previous glacial cycles is not well documented due to the scarcity of very long paleo-records with the requisite spatial and temporal resolution. Participants noted that the number of paleo-records from the Southern Hemisphere irrespective of glacial cycles was very low and stressed the need to increase efforts to acquire more paleorecords from the Southern Hempisphere.

Many important discoveries and well dated paleo-records were presented at the conference and will be published in an upcoming Geophysical Monograph. Several new areas of inquiry were discussed, including (1) the role of Southern Hemisphere local insolation in developing an independent chronostratigraphy circumventing the traditional method of deriving an age using orbital tuning and using the chronostratigraphy to correlate the Northern Hemisphere insolation with the glacial terminations, (2) phasing between the deep ocean and surface water warming (derived from benthic and planktonic foraminifers oxygen isotope (δ18O) across the terminations, (3) indication of monsoon failure from atmospheric oxygen isotope (δ18Oatm) and deep ocean temperature change from inert gases, (4) timing of the opal flux and deep ocean carbon dioxide (CO2) release in the atmosphere and phasing with the position of the westerlies, (5) dynamic proxies and models’ response to freshwater forcing in assessing meridional overturning circulation strength, and (6) the role of the Antarctic intermediate water in distributing heat and transporting old carbon around the ocean. For more information, please visit the AGU Chapman Conference webpage.