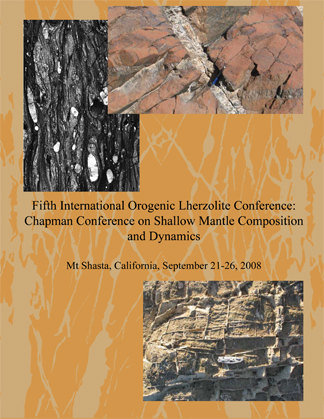 The Fifth International Orogenic Lherzolite Conference, also known as the AGU Chapman Conference on Shallow Mantle Composition and Dynamics, was held from September 21 to 26, 2008 at the Mount Shasta Resort, Mount Shasta, California. Previous Lherzolite Conferences were held near the peridotite massifs of Lanzo (N Italy, 1990), Ronda (Spain, 1995), Finero (Italy, 1999), and Horoman (Japan, 2002). Arguably, however, the tradition of field conferences on shallow mantle processes extends back at least to an AGU Chapman Conference on Partial Melting in the Earth’s Upper Mantle, held in the Josephine peridotite in 1976 by one of the conveners, to which we returned during this conference. The overall objective of the meeting was to assemble specialists in studies of peridotite massifs and upper mantle processes for a field conference to share recent results and discuss key outcrops in a group setting. The conference incorporated a broader range of topics than past orogenic lherzolite conferences, and included influential scientists in rock mechanics and low temperature alteration processes. Topics covered included: melting processes, melt transport, mantle metasomatism, localized and regional deformation, formation and nature of plate boundaries, mechanisms of intermediate depth earthquakes, and both geochemistry and physical processes of low temperature alteration.