APTICORE-ALBICORE: Global Events and Rhythms of the Mid-Cretaceous 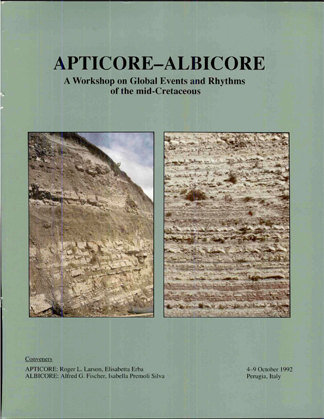 At the Cretaceous Resources, Events and Rythms (CRER) meeting in Denver, Colorado, of August, 1990, the Ticinella praeticinensis subzone was chosen as the focus for global study named ALBICORE. At the meeting, it also became clear that the climatic and oceanographic oddities of the mid-Cretaceous world might well have had their inception in the enormous basaltic eruptions that occurred, mainly in the Pacific, during Barremian-Aptian time. The possibility that these eruptions might have triggered the Cretaceous greenhouse as well as such effects as global marine anoxic evens and the burial of excessive quantities of organic matter called for another kind of global investigation involving paleontological, geological, geochemical and geophysical studies, preferably of fresh, cored material. Detailed studies are urged to quantify the reactions in the biosphere, hydrosphere, and atmosphere to this impulsive volcanism  and to understand the relative timing (and possible “phase lags”) of each response to an overwhelming “forcing function.” These studies, called APTICORE, would involve many of the same scientists needed for the ALBICORE meeting. APTICORE would deal with a larger time slice, a wider range of sedimentary facies and a broader range of geological problems.