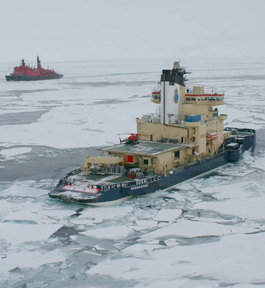 The Arctic Ocean is crucial for understanding global ocean circulation processes and Mesozoic tectonics, but the ice-covered waters complicate collecting the necessary data to explore this history. In 2004, the Integrated Ocean Drilling Program (IODP; Expedition 302) recovered the first deep cores from the ocean floor beneath the Arctic Ocean. The successful execution of this expedition has provided new insights into the sensitivity and response of the high latitudes to greenhouse gases. The unexpected results derived from these cores have exposed the ancient Arctic Ocean, providing the basis for further studies by framing new questions and by highlighting how little is known. The workshop “Arctic Ocean History, From Speculation to Reality” will bring together an international group of scientists to plan future scientific ocean drilling expeditions to the Arctic Ocean that seek to understand this ocean basin, the continents that ring it, and the global climate system. (Photo of Expedition 302 courtesy of A. Keinonen (© ECORD/IODP).)