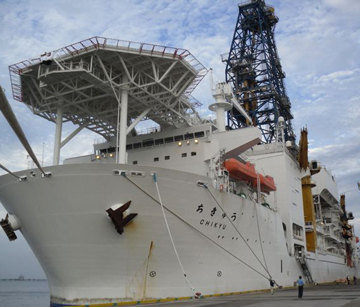 High-priority projects using the technique of scientific ocean drilling enabled by the Deep Sea Drilling Vessel (D/V) Chikyu were discussed by nearly 400 participants from over 20 nations at the international workshop CHIKYU+10 in Tokyo, 21-23 April 2013. D/V Chikyu uses riser technology developed by the hydrocarbon industry to achieve new capability to drill, sample, log, and monitor the subseafloor towards the ultimate goal of more fully understanding planet Earth. Over the next ten years, D/V Chikyu’s unique capability will contribute to the goals described in the science plan Illuminating Earth’s Past, Present, and Future of the International Ocean Discovery Program (IODP): Exploring the Earth under the Sea. At the CHIKYU+10 Workshop, the international science community identified eight fundamentally important “flagship projects” for which engineering and management planning are ready to begin. All require the uniquely available capabilities of D/V Chikyu to maximize the potential of scientific discovery. The Steering Committee of CHIKYU+10 organized the workshop discussion around five scientific themes that can be investigated using D/V Chikyu. The Dynamic Fault Behavior theme seeks to understand the causes and methodologies of destructive earthquakes and tsunamis. Two flagship projects, the Nankai Trough Seismogenic Zone Experiment (currently underway) and the Costa Rica Seismogenesis Project, bracket the variation of convergent margin characteristics that control earthquake behavior. A third flagship project, Slow Slip at the Hikurangi Margin, New Zealand, will investigate the role that the newly-discovered slow slip process plays in the earthquake cycle and its causal relationship to great earthquakes. In the Ocean Crust and Earth’s Mantle theme, researchers agreed on a flagship project to sample a complete section of oceanic crust and Drill to Earth’s Mantle in order to address key questions on ocean crust formation and the origin of plate tectonics, a dream born over 50 years ago as Project Mohole, with emphasis on a Pacific Ocean site. A second-priority flagship project would study the Life Cycle of the Oceanic Lithosphere as it is transformed by interaction with the hydrosphere while making the slow journey from creation at ocean ridges to reabsorption into the mantle and recycling water and gases from Earth’s surface. In the Deep Life and Hydrothermal Systems theme, the community recommends improving methods of regular sample collection and storage germane to microbiological research, so that all D/V Chikyu expeditions – even those not specifically focusing on microbiology – will contribute to discovering the limits of the subseafloor’s Habitable Zone. In the Continent Formation theme, the community fully supports the well-defined science of the flagship project Island Arc Origin: Izu-Bonin-Mariana, which will explore how the continental crust upon which terrestrial life depends is created from primeval origin. In the Sediment Secrets theme, the flagship project Ocean Basin Desiccation offers a unique opportunity to study the still-unexplored history of an extreme climate crisis when most of the then-vast Mediterranean Sea rapidly evaporated. The motivation for these projects and their relevance to society are described in the Report. The Steering Committee notes that these meritorious projects can keep D/V Chikyu fully occupied making fundamental discoveries about the Earth far beyond the five months per year that is under discussion for the IODP. Workshop participants enthusiastically discussed many additional and exciting project ideas. The CHIKYU+10 Workshop emphasized that Chikyu is a unique platform for planetary discovery. Without D/V Chikyu, these explorations have little or no chance of being brought to fruition.