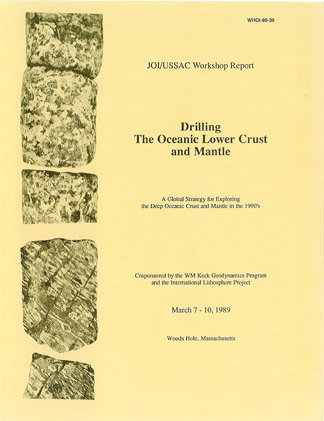 This workshop was convened to follow up on the Second Conference on Scientific Ocean Drilling (COSOD II) to devise a specific plan for deep crustal and mantle drilling over the next decade. Since COSOD II, however, there have been several developments which have had major impact on planning for this drilling. These include new and evolving models for volcanic segmentation at ocean ridges, a growing appreciation that faulting and deformation are an integral feature of the ocean crust, and the recent successful drilling during Ocean Drilling Project Leg 118 into a tectonically exposed section of layer 3 at Site 735B at the Atlantis II Fracture Zone in the Indian Ocean.

As a consequence of these developments, the community has come to realize that while obtaining complete penetration of the crust at a few sites remains a critical goal for ocean drilling, these will be inadequate to characterize a heterogeneous ocean crust. Thus, in order to evaluate fully crustal composition and structure, crustal drilling must include both an ongoing attempt to attain total crustal penetration, and a major program to drill offset partial sections of the deep layers of the crust and their critical contacts. Accordingly, this workshop has formulated a global strategy for using drilling to systematically study an ocean crust whose composition and structure is laterally variable and changes with spreading rate and tectonic setting.