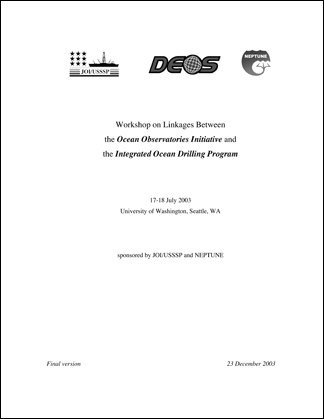 A workshop was held in Seattle, WA during June 2003 to discuss linkages between the Ocean Observatories Initiative (OOI) and the Integrated Ocean Drilling Program (IODP), including common interests related to scientific, technical, educational, and administrative goals. The IODP has just begun operations, and the OOI will soon become part of Ocean Research Interactive Observatory Networks (ORION), a long-term effort to develop, emplace, and maintain oceanic observatories in several settings.

The IODP and OOI share many common goals and challenges including: needs for infrastructure investment and commitment by numerous scientists, engineers, and educators; operation through a combination of top-down, long-term planning and grass-roots scientific proposals; unprecedented opportunities for education and outreach to both scientific and nonscientific audiences; an emphasis on active processes within the global ocean; a sustained commitment to technological development, including design, prototyping, and testing; and a dependence of each program on the successes of the other.

The primary aim of the workshop was to provide the scientific rationale that will underpin a broad range of scientific, technical, and educational programs involving ocean drilling and observatories. The specific goals of the workshop were to: