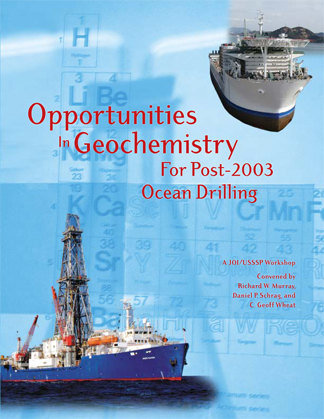 Geochemistry figures prominently in the successes of almost three decades of scientific ocean drilling by the Deep Sea Drilling Project (DSDP) and the Ocean Drilling Program (ODP). To continue to improve our understanding of the dynamic Earth we must expand upon this strong geochemical effort in the Integrated Ocean Drilling Program (IODP). In particular, we must observe and measure in increasing detail the interplay among physical, chemical, and biological processes. This need is growing as Earth’s population demands increased access to natural resources, protection from changes in Earth’s hydrosphere, and advance notice of major changes in Earth’s surface resulting from either natural or anthropogenic forcings.

The international scientific community has initiated several parallel efforts to ensure the continuation of scientific ocean drilling after 2003. These efforts began with the development of the ODP Long Range Plan in 1996. More recently, administrative offices have opened to implement the new IODP and to further international collaborations. Along this journey from concept to implementation many researchers and educators contributed to efforts to ensure that the IODP maintains the collegiality and expertise developed during the previous programs while permitting adjustments in the program’s scope and vision to account for changes in scientific paradigms.

As part of the overall planning effort for the IODP, members of the international marine and terrestrial geochemical communities met to articulate a collective vision of geochemistry’s role in the next decade of scientific ocean drilling and to identify geochemical problems needing further study. Discussions included shipboard and shorebased logistical requirements. The workshop was motivated by the need to identify common interests among diverse subsets of geochemists and to go beyond the scientific planning described in the IODP Initial Science Plan “Earth, Oceans, and Life.”