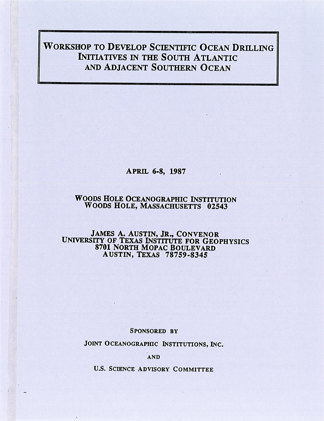 This workshop was designed to consider scientific ocean drilling priorities in the South Atlantic and adjacent Southern Ocean, an area defined broadly as extending from the large-offset fracture zones of the equatorial Atlantic and the associated translational/sheard margins of western Africa/northeastern South American to the passive continental margins of the Atlantic portion of the Antarctic. The goals of the workshop were two-fold: (1) To develop suites of drilling objectives in the South Atlantic from global, regional and topical perspectives by stressing themes, not individual drilling proposals; and (2) To broaden the base of expertise on which ODP efforts are based by including scientific input from non-ODP members.