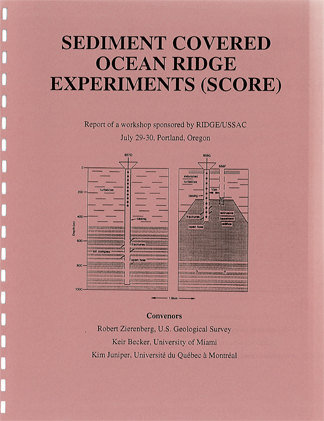 The purpose of the workshop was to determine and prioritize the pre- and post-drilling observations and experiments that would maximize the scientific return from oceanic drilling on sedimented ridges.  The proposal for a second leg of ODP drilling to address hydrothermal circulation and massive sulfide mineralization at the Middle Valley and Escanaba Trough sedimented ridges (SR II) has been highly ranked by LITHP and SGPP, and has been included in the 1996 prospectus.  The scientific community represented by RIDGE in the US and by InterRidge internationally is also interested in the scientific drilling and the associated research opportunities presented by SR II.  This drilling provides an excellent opportunity to extend the function of the drill ship beyond observation to active experimentation.  Drilling in the active hydrothermal field in Middle Valley on Leg 139 (SR I) demonstrated that drilling-induced disturbances could provide important information on properties controlling hydrothermal circulation, including pore pressure and permeability.  Pre- and post-drilling monitoring and sampling in the active hydrothermal fields will document hydrologic, geochemical, and biological changes induced by drilling, allowing new insights on processes controlling hydrothermal circulation.

These new opportunities extend beyond the experience of the Ocean Drilling Program and require careful planning to maximize the scientific return from the drilling.  Consequently, a small workshop was planned to determine the observations, experiments, and equipment needed to take advantage of this opportunity.