The Ocean Lithosphere and Scientific Ocean Drilling into the 21st Century 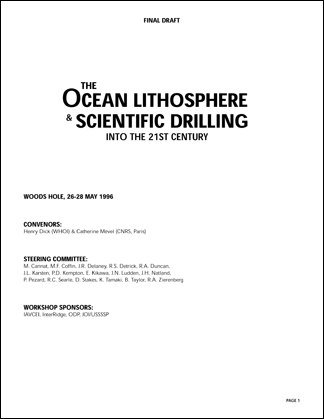 The oceanic lithosphere is formed as a consequence of two major kinds of apparently unrelated processes: the result of ongoing shallow mantle up-welling driven by the motions of the Earth’s plates at varying rates beneath the oceans, and by the more intermittent process involved in the emplacement of large igneous provinces (LIPs) driven by deep mantle circulation. Over a hundred scientists met at Woods Hole on May 26-28, 1996 to discuss the formation of the ocean lithosphere and how it could be explored through scientific drilling into the 21st century. This meeting was held in the context of the InterRidge and LIPs initiatives, which directly address the two components controlling the formation of the lithosphere and whose prior planning forms the basis for this integrated workshop. The workshop produced an an integrated drilling strategy in the framework of the present Ocean Drilling Program (1998-2003) and a future program involving deep-drilling capabilities for beyond 2003 without which this community believes it would be difficult to ever fully understand the evolution of the ocean crust and mantle over some two thirds of the earth.