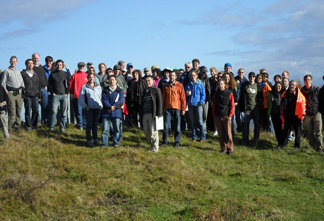 Slow slip events (SSEs) are a new class of shear slip found at subduction margins around the globe that have revealed the broad spectrum of fault slip behaviour. SSEs are widely acknowledged as one of the most exciting discoveries of the last decade in the Earth Sciences, and have implications for plate boundary processes and the seismic hazard posed by subduction megathrusts. Following the recent explosion of geodetic and seismological observations of SSEs, a variety of theories regarding their origin have been proposed; most of these theories consider episodic slow slip as a consequence of high fluid pressure within a conditionally stable frictional regime. Ultimately, testing theories for the fundamental physical mechanisms governing slow slip requires sampling of material by drilling into the SSE source regions and monitoring temporal changes in seismicity, strain rate, stress, geochemistry of fluids, and hydrological properties near the interface throughout the SSE cycle. The relatively close proximity of SSEs to the seafloor in locations such as New Zealand, central Japan, and Costa Rica indicates that ocean drilling studies have the potential to play an important role in revealing the physical processes behind SSE occurrence. In some cases (such as in New Zealand) direct sampling of the SSE source area may be possible.

The outcomes of this workshop include a full assessment of the scientific questions related to the slow slip process that could be investigated by ocean drilling, a compilation of existing and required auxiliary datasets in areas of potential exploration, and an action plan for the future. For additional information, please visit the workshop website.