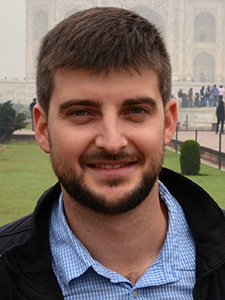 One of the most widely studied climatic intervals within the last several million years is the so-called “PRISM” (Pliocene Research, Interpretation and Synoptic Mapping) time interval between ~3.0 and 3.3 Ma. This interval is of particular interest because it was the most recent time that Earth’s climate was substantially warmer than present over a sustained period. Additionally, atmospheric CO2 levels were ~90ppm higher than preindustrial levels, similar to 21st century concentrations. Therefore, the PRISM time-slice of the mid-Pliocene provides an analogue to future anthropogenic climate conditions that we may experience by the end of this century. Studying various aspects of the climate system during this time period is particularly important for numerical models that seek to test climate sensitivity at various CO2 levels.

My research interests in paleoclimatology are broad, including deep ocean circulation and climate variability on orbital and suborbital timescales, sea level variability, and the abrupt climate transitions during deglaciation. It was at my undergraduate program in Geology at the College of William and Mary where I first grasped of the severity of mankind’s negative impact on the planet and the implications of future climate change. I received my first opportunity to pursue research in paleoclimatology through a joint thesis project with the United States Geological Survey reconstructing paleoceanographic changes in the Arctic Ocean over the last 50,000 years with Dr. Rowan Lockwood and Dr. Thomas Cronin. After completing my Bachelor’s degree, I continued my education at the University of Delaware working with Dr. Katharina Billups reconstructing changes in deep ocean circulation throughout the mid-Pleistocene climate transition. I am currently pursuing my PhD at Rensselaer Polytechnic Institute where I am working with Dr. Miriam Katz. I am studying Quaternary sea level highstands and variability along the southeastern Atlantic Coastal Plain, as well as reconstructing changes in deep ocean circulation during the Pliocene ~3 million years ago. This period represents the most recent time in Earth’s history with sustained atmospheric CO2 concentrations comparable to the 21st century, lending insight into climate sensitivity in a future ice-reduced world.