Fault Healing and Shallow Slow Slip at the Hikurangi Subduction Margin: The Impact of Normal Stress and Loading-Rate on Friction 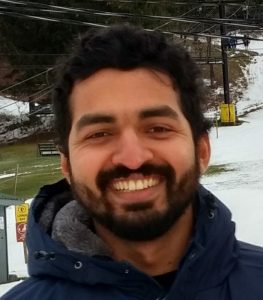 Observations of a host of slip behaviors at subduction zones around the world, challenging the standard model of discontinuous seismic and aseismic slips, has generated much excitement in the geoscientific community. However, the mechanics of these phenomena is, as yet, poorly understood. The observation of repeating slow slip events at the northern Hikurangi margin suggests a mechanism by which the slipping fault patch is able to regain its strength, or ‘heal’ after a slip event. This is supported by numerical models constrained by geodetic measurements of fault relocking. However, this hypothesis has never been tested on sediments from a slow slip source region. Here, I propose to do so by conducting laboratory experiments on fault zone and subduction input samples acquired during expedition 375 to constrain the frictional regime of shallow slow slip at the northern Hikurangi margin.

I got my undergraduate degree in geoengineering from the National Institute of Technology Karnataka in India. It was during my masters in rock engineering, at the University of Arizona, that I started to grow a keen interest in geophysics and fault mechanics. At Arizona, I worked on better quantifying stability and failure mechanisms for underground constructions. Through this, I developed an interest in applying similar techniques to probe the frictional mechanisms responsible for earthquakes. Currently, as a graduate student working with Prof. Chris Marone at Penn State, I use a combination of friction experiments and ultrasonic acoustic measurement techniques to constrain the frictional behavior of faults at multiple scales. As part of this work, I hope to better understand the frictional regime of shallow slow earthquakes at the Hikurangi Subduction Margin. This will allow for a better understanding of the underlying mechanisms that govern the mode of failure of seismogenic faults. When I’m not making tiny earthquakes in the lab, I’m usually climbing or baking.