Land-Ocean Interactions Across the Indian Ocean: Toward Regional Integration of Recent Drilling Results 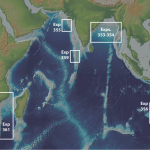 The goal of this workshop is to review results of the recent regionally-focused scientific drilling expeditions in the Indian Ocean, to propose possible paths for an integrated understanding of the role and response of climate in regulating Indian Ocean hydrology, hydrography, sedimentation, and biogeochemistry, and to synthesize practical lessons for future scheduled and proposed regional IODP drilling campaigns.

Between 2013 and 2016 IODP expeditions drilled in the Indian Ocean and Western Pacific oceans covering the Asian and Australian monsoon domains and adjacent regions. Reconstruction of the paleomonsoon was a leading objective for the following expeditions: IODP 346 (Sea of Japan and East China Sea), 353 (Bay of Bengal and Andaman Sea), 354 (Bengal Fan), 355 (Indus Fan), 356 (northwestern Australian continental margin), and 359 (Maldives). Expedition 361 offshore East Africa was designed to reconstruct evolving southern African environmental conditions during the Neogene and in particular to look at the history of the Agulhas Current system since around 5 Ma. The global reach of this current system may in turn play into the modulation of the monsoons.

If we are to make significant progress in understanding the climate and oceanography of the Indian Ocean region then a synthesis of results following exchange of information and debate is crucial.

While each expedition has made progress toward achieving its individual scientific objectives, any serious attempt to understand long-term evolution of the Asian monsoon, and its impact on neighboring climate systems, requires a more regional synthesis because the monsoon span much of the Indian Ocean and Asian continent but is manifested in different ways in different geographic areas. For example, while the monsoon in the Arabian Sea is characterized by strong winds, with the neighboring land masses tending to be relatively dry, contrasting with the much wetter conditions around the Bay of Bengal. This can lead to some contradictory results such as that the wind record in the Maldives and the upwelling offshore Oman do not readily compare with the environmental conditions known in the Himalayan foreland basin. How the South Asian monsoon relates to the climatic evolution of the East Asian monsoon, or the migration of the Intertropical Convergence zone over Africa is something that simply cannot be attempted without detailed comparison of results between the different expeditions.

This workshop draws together researchers across these expeditions, to discuss key results and the central issues that have inspired this campaign of drilling. We aim for a broader regional perspective that will build connections between groups of researchers that might otherwise not come together. The workshop will provide the community an opportunity to synthesize results from different parts of the Indian Ocean and to build a more powerful, all-encompassing climatic model for the Cenozoic.

The campaign of drilling across the Indian Ocean also provides an important series of lessons for future sets of expeditions, such as those now planned for the Atlantic in 2019 and beyond. Many of the Indian Ocean expeditions considered different aspects of the Asian monsoon and together provide the chance to make some significant advance within a large topic in the Earth sciences. The ability to draw together and synthesize lessons learned from different expeditions is central to meeting the goals of the program as laid out in the IODP Science Plan. This same need to make substantive progress on large questions, beyond what is possible with regular funding or single drilling expeditions, while addressing the community goals will be significant for future campaigns of scientific drilling.

Exchange of scientific and logistical ideas in this workshop will provide useful lessons when developing programs involving multiple expeditions in the future. We particularly aim to examine how the stated goals of the Indian Ocean drilling campaign prior to operations, compare with the actual results. We want to understand whether a series of linked expeditions like this was more successful as a result of their association. Do they really represent a coherent campaign? Where did the program exceed expectations? Where did we fail to make the advances we were aiming for and why? How can we maximize the long term scientific impact by facilitating the exchange of ideas and data?

The workshop will be held at the University of Rhode Island’s Graduate School of Oceanography located on the picturesque Narragansett Bay Campus, July 10-12, 2017. Workshop participants will be housed at the Hampton Inn in South Kingstown, RI. Travelers can fly into Providence’s T. F. Green airport, a ~30 minute drive to the hotel and campus, or through Boston’s Logan Airport, where they can take the train to southern RI. Buses, shuttles, or taxi’s are available for transportation between the airport/train stations and hotel. A block of rooms are available for participants at the Hampton Inn, South Kingstown, RI. The hotel is situated near restaurants, a coffee shop, and a movie theater.

Each day, participants will be transported by van between the hotel and campus. The meeting will be located on the north side of campus in the Coastal Institute Building, with meals served in the Mosby center overlooking the water.

Contact Peter Clift (pclift@lsu.edu) with any questions and to apply for the workshop.