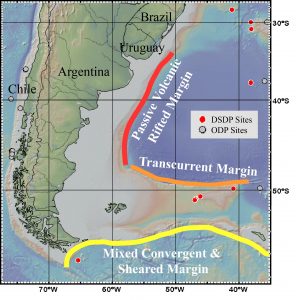 The Argentine Continental Margin (ACM), one of the largest margins worldwide, is a complex feature where geotectonic evolution as well as the post ocean-opening history configured three types of margin: Passive volcanic rifted (Type “E”), Transcurrent (sheared, Type “F”) and Mixed (convergent and sheared, Type “A+F”). Apart from its implications in the evolution of the Southern Ocean, the ACM constitutes a key region in the global oceanographic-climatic system as it is the only place in the southern ocean with a net water-masses exchange between equatorial and south polar regions. Strong Antarctic-sourced currents run along the margin driven by the Coriolis force from 56°S reaching regions up to at least 34°S or even farther North. Margin evolution has been affected by climate, current, sea-level, and tectonic processes as well as by sediment input patterns and history. All these characteristics, added to the fact that this is a critically important but under-sampled portion of the global ocean conveyor belt, makes it important to understand how IODP scientific drilling can be used to recover the important records and sediments that lie within the “passive” sector of the margin (APVCM), one of the remaining “White Spots” of the World Oceans. Topics addressed during the Workshop are expected to include: Evolution of the South Western Atlantic Ocean; Structure of the Argentine Passive Volcanic Continental Margin (APVCM); Nature and timing of the rifting and thermal evolution of the margin; Nature of the sedimentary processes and facies that have shaped the margin; Margin construction, stability and evolution; Paleoceanographic, including land and ocean climate, records from this critical margin; History and character of surface and deep circulation along the Argentine margin; Opportunities for diagenetic, fluid flow and deep biosphere studies. Sedimentary features of about Oligocene to Pliocene age are particularly well developed on the Argentine Margin and records from this time interval may be important to resolving key problems of the evolution of Earth’s climate through this period. This 3-day workshop is being held to bring together researchers from different disciplines and continents for face-to-face discussions aimed at developing the strongest proposal(s) based on the best data available for the region. One or more drilling proposals are expected to be submitted to IODP following the workshop, since the JOIDES Resolution is expected to be in the Atlantic Ocean to pursue drilling opportunities starting in 2018 and 2019.