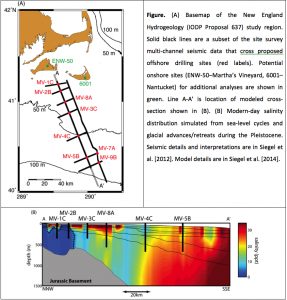 Freshwater resources, particularly groundwater, are declining due to over-exploitation and climate change. Stresses on groundwater systems are increasing due to population growth and urbanization. Coastal aquifer systems are especially vulnerable because of sea-level rise and because over-pumping influences the position of the freshwater-salt water interface. However, there is growing evidence that passive margin sediments host large volumes of paleo-freshwater that were emplaced during the past 2 million years. Groundwater studies of North America and Europe show that large volumes of fresh, paleo-groundwater were emplaced during Pleistocene glaciations and are not in hydrologic/geochemical equilibrium with current meteoric recharge. Evidence of glacially emplaced freshwater in basins comes from many sources, including carbon-14 and noble gas ages and oxygen isotope data. These observations motivated numerous modeling studies that evaluated how sub-glacial meltwater may create non-equilibrium conditions and may drive freshwater deep into sedimentary basins. Recent drilling offshore New Jersey (IODP Expedition 313: New Jersey Shallow Shelf) has revealed non-equilibrium conditions, but documents significant impact from modern meteoric recharge.

IODP Proposal 637 was developed to further understand the dynamics of these onshore-offshore hydrologic systems. In this workshop we will focus on the coupling between glacial dynamics, sea-level variations, and groundwater flow for Martha’s Vineyard, Massachusetts, USA and the U.S. Atlantic continental shelf offshore Martha’s Vineyard.  The shelf experienced glaciations in the late Pleistocene in combination with sea-level change throughout the Pleistocene. Glacial loading, sea-level fluctuations, and meteoric recharge processes have all been suggested as driving mechanisms that emplaced freshwater nearly 100 km offshore New Jersey that reaches depths of several hundred meters below the sea floor (mbsf). Additionally, Nantucket Island, offshore Massachusetts, USA, has freshwater deeper than 500 meters below sea level (mbsl), which is out of equilibrium with modern sea level; however, the origin, the extent, and the emplacement mechanisms of this freshwater offshore Massachusetts, USA, are not fully understood.

Several 2D and 3D numerical modeling studies have predicted freshwater distributions for the continental shelf offshore New England. These models incorporated sea-level change and ice sheets as boundary conditions in an effort to explain salinity patterns observed below Nantucket Island, and to predict the volume and distribution of offshore freshwater. These models demonstrate the range of freshwater distributions and their sensitivity to sea-level variations and glacial loading as well as to permeability architecture. IODP Proposal 637 was designed to sample these freshwaters, to determine their extent, and to characterize hydrologic properties of the sediments. This would allow us to improve our model constraints and to evaluate the origins of these freshwaters, which could be (1) modern meteoric recharge; (2) meteoric recharge during sea-level lowstands; (3) sub-ice sheet meltwater recharge during glaciations; or (4) a mixture of meteoric and sub-ice sheet water.

At each proposed site we will perform standard core and porewater analyses, downhole logging, and specialized hydrologic, geochemical, and microbiological tests. In this workshop we will discuss optimal sampling strategies and address the scientific advantages of an amphibious project that samples the onshore-offshore hydrogeologic system.

The overall goals of the workshop are to develop a new operational plan for IODP Proposal 637 that meets fiscal constraints noted by the ECORD Facilities Board and to establish an amphibious component of the project to accomplish our science objectives. This amphibious component will include developing a proposal for submission to the ICDP. These goals will be accomplished by:

1. Developing ideal sampling and measurement plans for geology, geophysics, geochemistry, and microbiology across the shoreline and the shelf;

2. Prioritizing scientific operations including site order and target depths; and

The workshop will be held May 22-23, 2017 at the J. Erik Jonsson Woods Hole Center of the National Academy of Sciences in Woods Hole, Massachusetts, USA. Woods Hole is easily accessible from Boston’s Logan airport.

Details related to lodging and workshop travel will be provided to accepted participants.

Participation support is available from the U.S. Science Support Program (USSSP) for a limited number of participants from U.S. institutions and organizations. Participation for support for a limited number of international participants will be provided by the ICDP. All interested participants should send a single PDF that contains: (a) a 2-page CV or biographical sketch (NSF-style); and (b) a 1-page statement of interest to Brandon Dugan [dugan@mines.edu] no later than February 17, 2017. Students must include a letter of support from their advisor. We will review applications and send invitations by March 20, 2017.

We encourage applications from participants with experience in scientific drilling, water sampling and analysis (geochemistry and microbiology), hydrogeology, and geophysics to ensure the requisite background knowledge and leadership exists at the workshop. We also encourage graduate students and early career scientists to apply to attend so they can become engaged in the planning process and begin learning how to lead future drilling proposals. Participation in the workshop is not only limited to academic researchers. Program officers, government representatives, and private sector scientists are highly welcome and are explicitly encouraged to participate.